Multivitamins with Iron for Women

The amount of iron your body needs can vary based on age, sex and your diet. Iron is an important mineral needed for growth and development. Your body uses it to make hemoglobin (a protein in red blood cells that carries oxygen) and myglobin (a protein that provides oxygen for muscles). It's also essential to producing several hormones your body needs to function.i As a part of myglobin, iron also supports muscle metabolism and connective tissue health. Even more, iron is essential to physical growth, neurological development and cellular functioning.ii 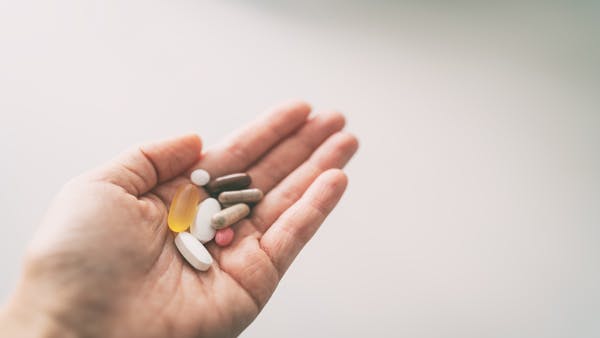 Most people get enough iron, but there are certain groups of people who are vulnerable to iron-deficiencies. Some people that have a hard time getting enough iron generally include:

Why is Iron for Women Important?

Overall, women may struggle more than men to get enough iron because women generally require more iron in their diets. Although men and women both metabolize iron at the same rate, women require up to 18 mg of iron daily (or 27mg while pregnant) while men only need around 8 mg per day...iv

And why exactly do women need more iron in their diet than men? The menstrual cycle and the amount of blood lost each day is the primary reason that women need more iron in their diet. Because women have to produce more blood each month which contains high amounts of iron, it makes sense that women require more iron on a day-to-day basis. Iron is also especially important for pregnant women when their bodies are hard at work developing babies.v

If you don't get enough iron in the short term, the effects won't be very obvious. Your body can take stored iron from other places in the body first. However, if your iron levels get too low it can lead to iron-deficiency anemia. Anemia is a health condition that is developed when there isn't enough red blood cells or hemoglobin in the blood, which is where most of your body's iron levels reside.vi

Symptoms of anemia are:

Added to these symptoms, people with iron-deficiency anemia are less able to fight off colds and other infections, do regular work and exercise or control their body temperature.vi

How to Increase the Iron in Your Diet

Dietary iron, or the iron we get from what we eat, comes in two main forms: heme and nonheme. Meat, seafood, and poultry provide both heme and nonheme iron, while plant-based and iron-fortified foods only provide nonheme iron. The primary way you can increase iron in your body is by eating more iron-rich foods. The highest sources of heme iron in foods include lean meat and seafood, but they also contain nonheme iron. You can get dietary non-heme iron from nuts, beans, vegetables and fortified grain products.vii

Foods rich in iron include:

When to See Your Doctor for Iron-Deficiencies

If you suspect you may have anemia or you think you’re experiencing iron-deficiency symptoms, reach out to your doctor or healthcare provider. They can run blood tests or diagnose your symptoms and either prescribe you an over-the-counter multivitamin like Centrum or a higher dose of iron supplement if your deficiency is worse.

It's important to talk to your doctor about iron supplements before you take them if you also take other medications. Some ingredients that may interact with iron and become less effective include Levopoda, an ingredient in medicines used to treat Parkinson's and restless leg syndrome. Levothyroxine, an ingredient used in medicines to treat goiter, thyroid cancer and hypothyroidism, is another that becomes less effective when taken with iron. Lastly, proton pump inhibitors like lansoprazole and omeprazole decrease stomach acid, which can reduce the amount of iron the body can absorb.x

Find iron supplements for women that feed your cells and help support your body like Centrum Women. Investigate ingredients for different multivitamins and learn more in the Centrum Expert Corner.